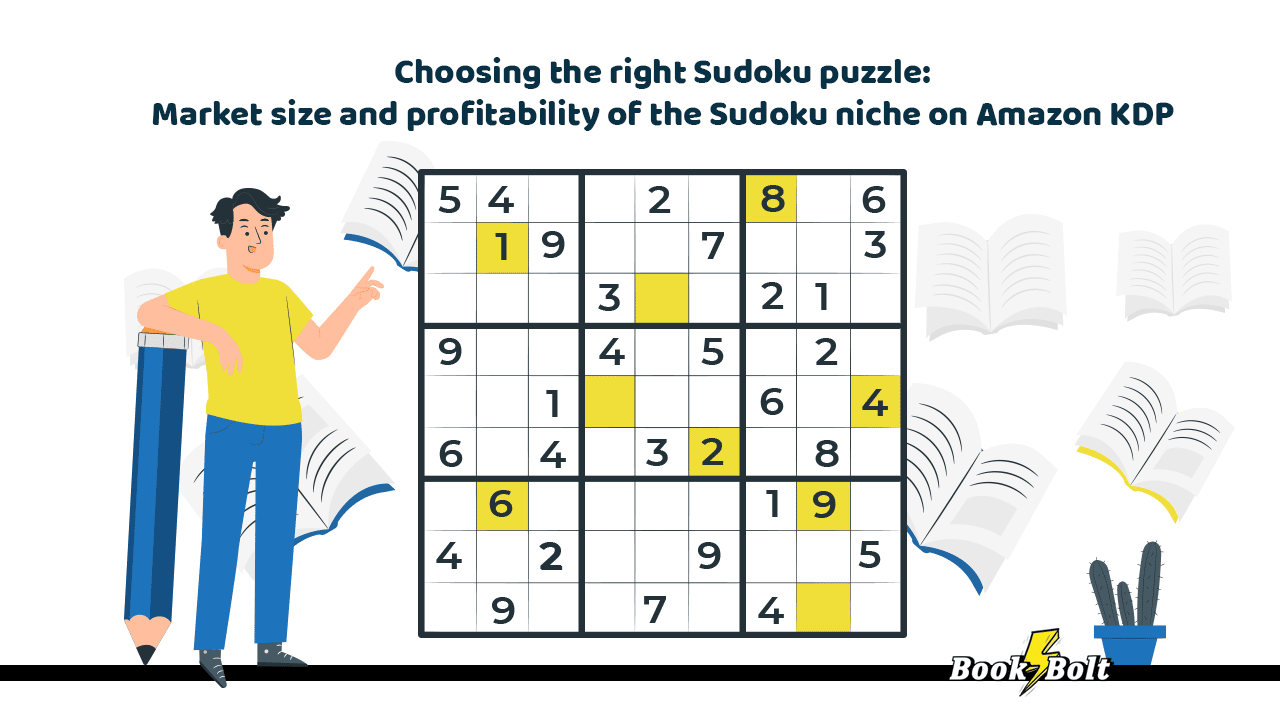 Choosing the right Sudoku puzzle: Market size and profitability of the Sudoku niche on Amazon KDP

Amazon KDP offers a wide selection of puzzle types for shoppers to choose from. This availability of options enables sellers to diversify their portfolios and guarantee consistent sales.

One of, if not the most popular puzzle type, is the Sudoku game. And it, too, has many variations.

The Sudoku puzzle market on Amazon KDP can be divided based on three major criteria – puzzle types, experience level, and audience type. In this article, we’ll analyze these segments in detail and determine which niches are most profitable and attractive from a seller’s perspective.

To examine the sudoku puzzle book category on Amazon KDP, we utilized the features and capabilities of Book Bolt. Through Book Bolt tools like Cloud search and Keyword Search, we identified each sudoku puzzle type’s market size and profitability.

Let’s dive into our discoveries.

When it comes to puzzle types, we uncovered the following varieties:

Although there are other known sudoku types, our research showed that products like color sudoku or symbol sudoku are not popular on Amazon KDP.

Samurai sudoku puzzles contain five overlapping sudoku grids and follow the classical sudoku rules. There are plenty of Amazon listings in this niche. At the same time, when examining the space with Book Bolt’s Cloud tool, we saw that only six have made it to the bestsellers list.

This could mean one of two things. One explanation is that the niche isn’t trendy among shoppers and doesn’t generate much interest. Another possible reason is that sellers in the space don’t use specific keywords like” Samurai” in their puzzle book listings.

Our discoveries from keyword research reveal that there is enough search for keywords related to Samurai sudoku. In other words, the user demand is high enough to create a large market. For example, words like “djape samurai sudoku” generate a search volume of more than 37,000 on Amazon. Others like “sudoku samurai puzzles for adults” and “sudoku samurai” are also popular, with more than 3,000 searches per month. 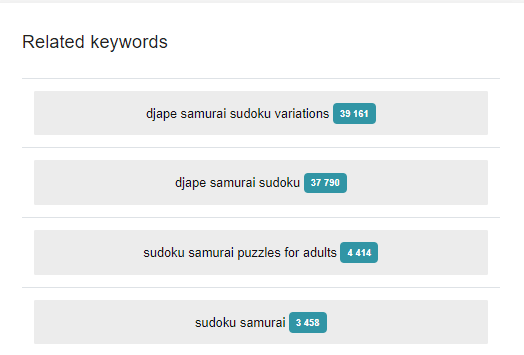 Using Book Bolt, we also identified important information about the actual profitability of the space:

With an average BSR of 66,674, the sub-niche is considered one of the top-performing in the sudoku puzzle book market.

Another type of sudoku puzzle, the Jigsaw sudoku variant is made up of box regions that are replaced with wiggly pieces. The pieces fit together like a jigsaw, which gives this puzzle type its name.

A look into the profitability of the market confirms our theory:

Pocket sudoku is a classical form of sudoku that has been explicitly designed for convenience when traveling. Its format is small enough to fit inside a pocket and makes using the product easy no matter where the user is.

Amazon shoppers certainly show interest in this type of product, considering that keywords like “sudoku pocket size 200 easy puzzles” are searched for around 3,200 times every month.

Furthermore, the metrics that we use for determining the profitability of a niche also show that there are money-making opportunities to explore:

With a very similar average BSR to samurai and jigsaw sudoku types, pocket sudoku puzzles can turn into a way to hit the jackpot as a seller of low- and no-content books on Amazon.

When analyzing the sudoku puzzle book market, it’s essential to also add the different grid sizes into the equation. Apart from a segmentation based on sudoku types, the niche is also divided into sections based on the grid size of the product.

Here’s all you need to know about each.

From the three options we outlined, the 4×4 sudoku puzzle type is the most attractive one for shoppers. The most searched for keyword in the space is “4×4 sudoku for kids ages 4-8”, which comes with a monthly search volume of 6,460. Keyword research into the niche shows that most user searches also include the word “kids”. From these findings, we can conclude that the 4×4 sudoku puzzle book market is very popular with children.

In addition, this grid size also has the lowest average BSR, revealing the highest sales volumes:

6×6 sudoku puzzle listings on Amazon attract the least amount of searches from shoppers. Furthermore, they also have the highest average BSR, which translates into the lowest sales volumes. We wouldn’t recommend tapping into this niche if you’re deciding between sudoku grid sizes for your new listings.

The most popular keyword phrase from the search volume perspective is “kids sudoku 6×6” with 2,628 monthly searches. Meanwhile, the profitability metrics of the product type show the following:

The average BSR is significantly higher than other puzzle book types, but prices are virtually identical.

The last grid size to assess from the sudoku puzzle book market is the 16×16 version. Positioned after 4×4 sudoku puzzles, this option also stands out with a high level of interest from Amazon buyers. The top searched for keyword “mega sudoku” enjoys a search volume of nearly 6,000 searches every month. This is a demand that sellers shouldn’t neglect as it opens opportunities for profit generation.

16×16 sudoku puzzles perform much better than 6×6 puzzles from a sales perspective. How do we know? By discovering that the average BSR is much lower:

The sudoku puzzle book market can also be divided based on the level of experience – easy and hard sudoku puzzles. They both generate a similar amount of interest from shoppers, which can be detected from a look into the top-searched for keywords:

However, the  average BSRs differ:

These insights suggest that easy sudoku puzzles are much more profitable as their average BSR is significantly lower.

The final level of market segmentation we’ve explored is based on audience types. Research on Book Bolt suggests that there are three main audiences for sudoku puzzle books – adults, kids, and seniors.

Of the three segments, sudoku puzzles for adults are the most profitable in terms of sales. They generate the highest sales volumes, with an average BSR of 675,415. They also attract the most interest from shoppers. We have identified this as a result of keyword research on Book Bol.

The niche-specific keyword with the highest search volume is “sudoku puzzles for adults”. The phrase generates more than 97,000 searches per month, which is much higher than keywords for other audience segments.

Let’s sum up the crucial metrics that shape the profitability of this niche: 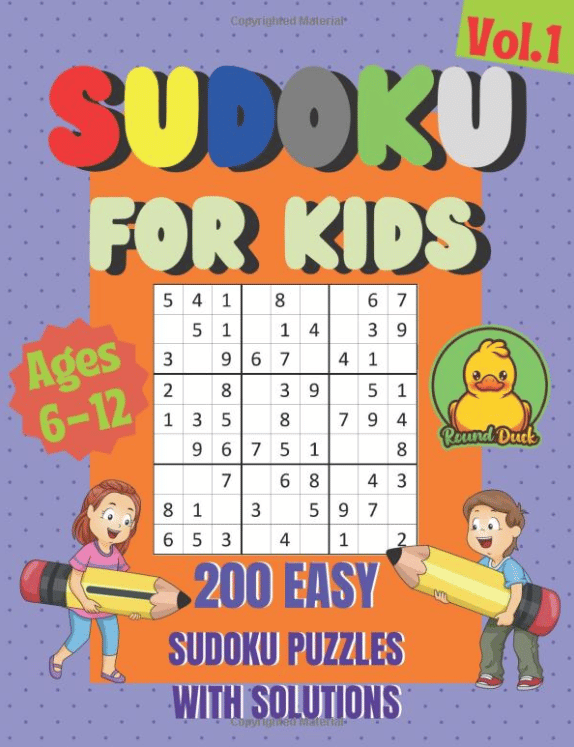 Sudoku puzzles for kids also attract a decent amount of interest, yet much lower than sudoku puzzles for adults. The top searched for keyword in the market is “sudoku for kids”, which has a search volume of 34,683 per month.

Meanwhile, the following insights reveal the sales potential of the product type:

With a relatively similar average price to that of sudoku puzzles for adults, the kids niche doesn’t score as many sales. This conclusion is made based on the higher average BSR.

Finally, some sellers focus their efforts on creating sudoku puzzles for seniors. Although this niche could be tapped into because of the low competition, data reveals that it’s not as profitable as other options.

The average BSR of the sudoku puzzles for seniors niche is the highest from all other examined markets in this article. It, therefore, generates the fewest sales. In addition, the search volume of niche-specific keywords is not very high. For instance, the most searched phrase in the space is “sudoku large print for senior”, which only generates 4,377 searches monthly.

From our findings, we can conclude that the following sudoku puzzle types are the most profitable in terms of sales and demand:

In other words, creating an easy jigsaw sudoku puzzle for adults with 4×4 grid size will achieve the most fruitful results for you as a seller.