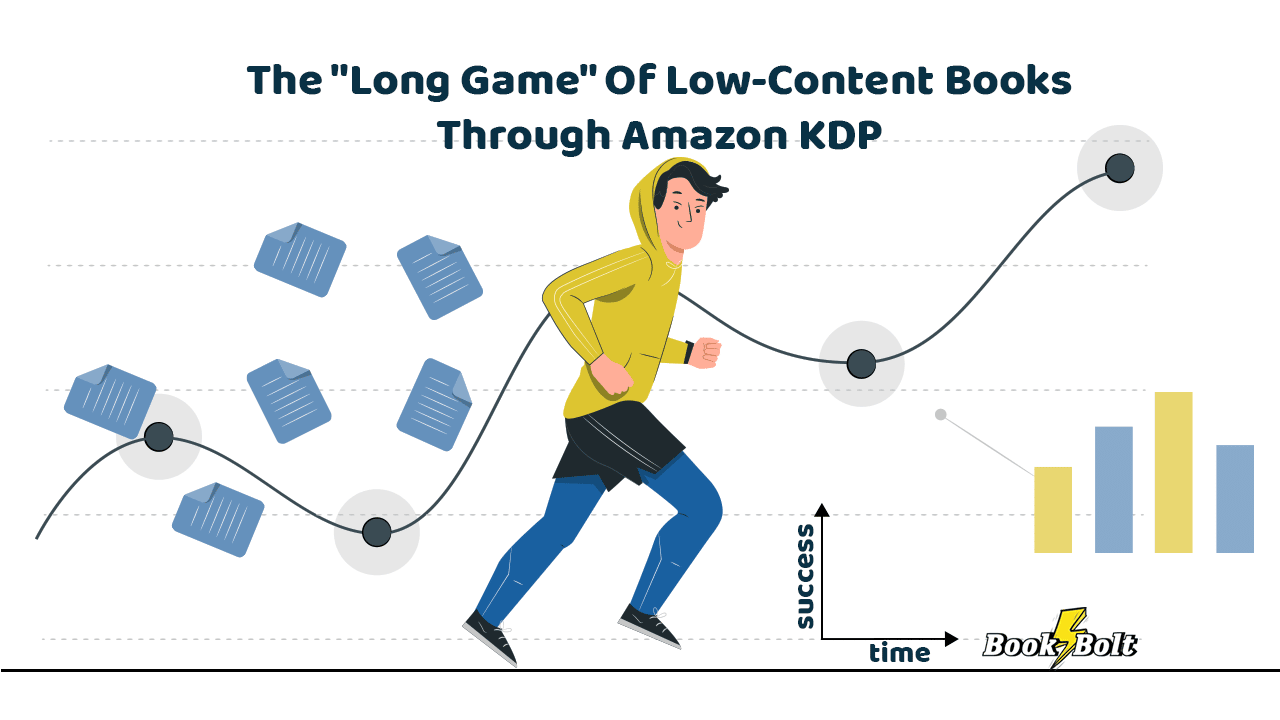 The “Long Game” Of Low-Content Books Through Amazon KDP

Whether you’re new to the KDP no/low-content book business or a seasoned professional, you may be noticing a trend: lots of KDP “gurus” are playing Chicken Little about the prospects of running such a business. While their data may be correct, their panic is as unjustified as when Jim Cramer comes onto the Today Show and tells Mr. and Mrs. America to put their money in gold because there’s softness in the stock market.

As anyone experienced in the stock market (not me, that’s why I write for a living) will tell you, this is when the “stupid money” pulls out of the market. When a stock – particularly that of a new company – is hot, it gets publicized as a sure bet and then the aforementioned “stupid money” pours in and overheats it. Eventually, earnings don’t match valuations or the biggest stockholder tells the company to stop making Beanie Babies and start making lawnmowers -performance falls, the stock follows with it, and when word gets out, the stupid money panics and pulls out. Panic is more contagious than Covid, so the fall accelerates until it crashes.

The “smart money”, however, was already in at the early stage, and therefore holds the stock until it inevitably bounces back when the CEO is fired and a seasoned turnaround expert comes in. “Smart money” also knows that this is the best time to get into the stock. “Buy the dip,” they say. The stock recovers, panic recedes, and the world continues to turn.

Stocks are – unless you’re actually in the financial business and can take risks – a long game.

So is the world of no/low-content publishing. 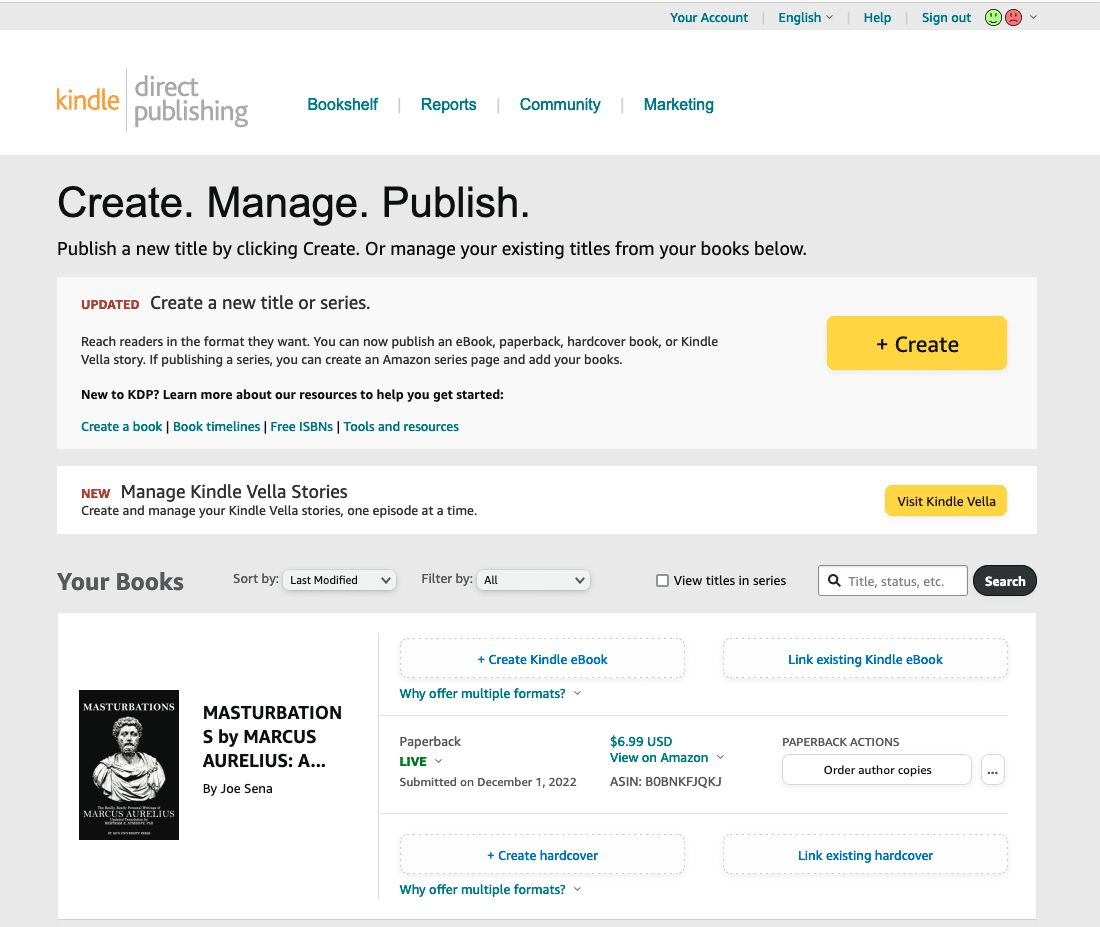 “Buy The Dip” in Low/No-Content Publishing

The “gurus” who scream from the YouTube screen have Jim Cramer-ed the market for years, touting these projects as “get rich quick” schemes. “How I made $50,000 in one month selling empty books on Amazon”. And as we’ve demonstrated in many articles here, it’s super-easy to publish a low/no-content journal, planner or blank book. Combine a low-barrier-to-entry with promises of 401K-sized passive returns and you’ve got an engraved invitation for “stupid money” – in this case, it’s people who only want to make money and don’t care about the product itself. They create dozens or even hundreds of books with slight variations to the covers and nothing between them and assume that tweaking the SEO will bring untold riches.

Dear reader, I don’t think I need to tell you that if something looks too good to be true, chances are it’s not true.

Now is the best time to go into low/no-content (L/NC) books, as long as you have two guiding principles:

As the gurus scream that it’s time to “get out of L/NC books”, those who suffer will be the folks who just followed tutorials about simple covers and gaming the algorithm. They are the ones who flooded the market with countless books that are too similar or don’t appeal to the buyer. If they had any sales before, they will decline. Their rankings will as well. So, they will stop making more books because they will simply move on to the next “get-rich-quick” scheme.

The flood will recede. But should you wait for completely dry ground before you embark? 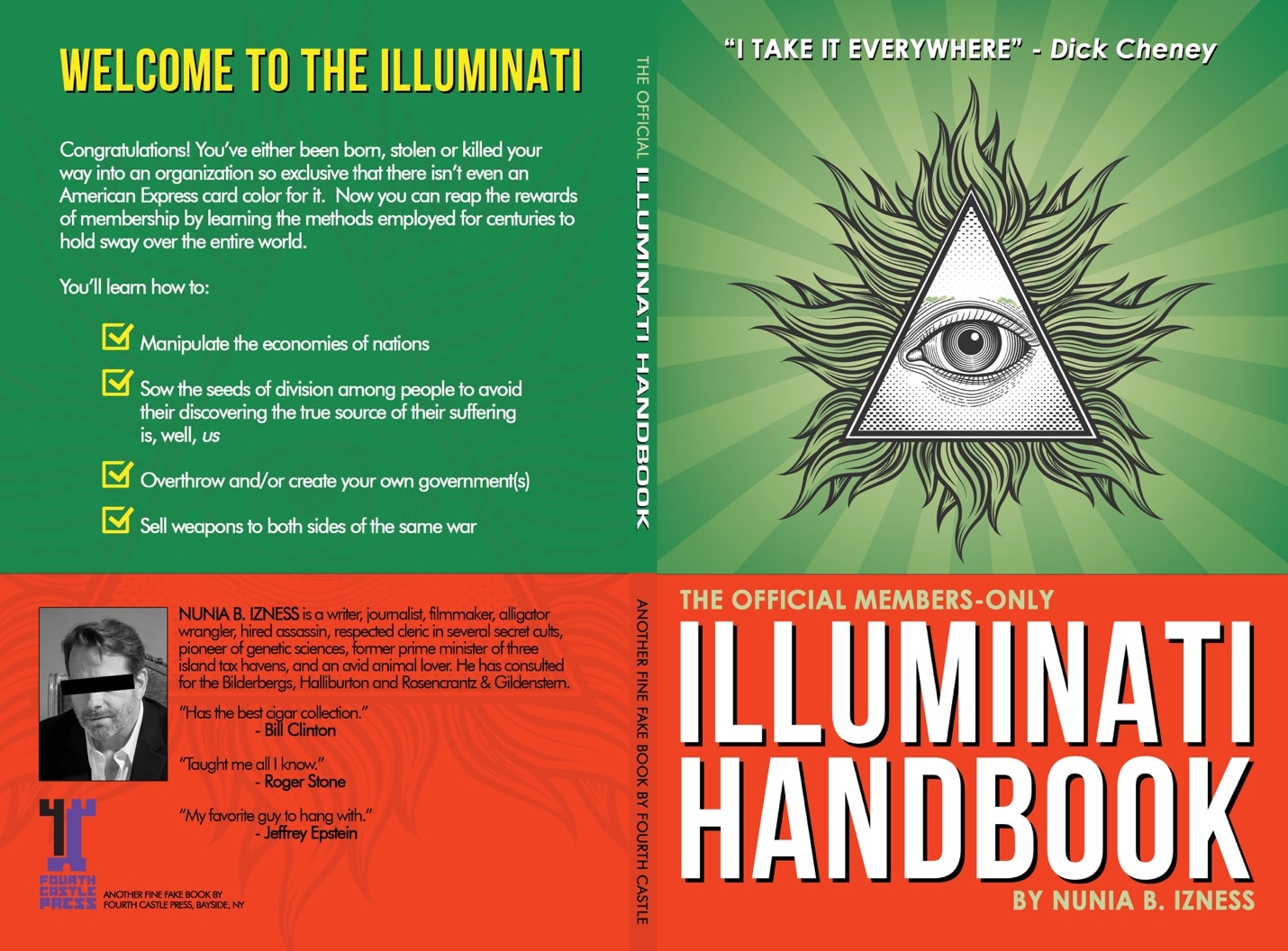 I’d tell you what’s inside, but then I’d have to kill you.

You Understand That it is a Long Game

No! As everyone else is running out of the theater, this is the time to get the best seat. However, enough damage was done by the stampeding crowd that it will take a bit before the next show starts. But when it does, you’ll be sitting in the best seat in the house.

These mixed metaphors illustrate that this is a “buy and hold” scenario. To put it in L/NC terms, now is the time to start working on your books, put them up when they are ready, put up a lot, optimize your listings and wait until your books organically reach higher rankings.

You Know You Have Something Different

How many “Gratitude Journals” and “Live Laugh Love” planners/journals have you seen on Amazon? What’s going to compel you to buy one over the other, especially if they have nothing but lined pages between them? Probably nothing.

However, if you find a journal/planner with a cover that speaks to you, your interests, your lifestyle, or one that will cause a double take when you’re writing into it on the train, there’s a good chance you’ll buy it.

This year, we decided to try out our own type of L/NC book, because it was something we knew we could bring a different approach to: Self-Help book parodies.

Gosh, I hope the advice in this book helps…

You Know Exactly Who Will Buy It

I love a well-done parody. I was raised on Mel Brooks, Weird Al Yankovic (even his recent biopic is a brilliant parody of biopics) the (now historically problematic) National Lampoon, the Zucker Brothers and Mad Magazine. In 1978, a newspaper strike spawned the creation of the One Parody to Rule Them All: Not The New York Times.

It was a letter-perfect reproduction of The Old Gray Lady except all the stories were fake. It was The Onion before there was an Onion (which started as a college humor magazine that happened to be my competition back in the 80s when I was editor of – you guessed it –my college’s humor magazine). It is preserved for posterity here. 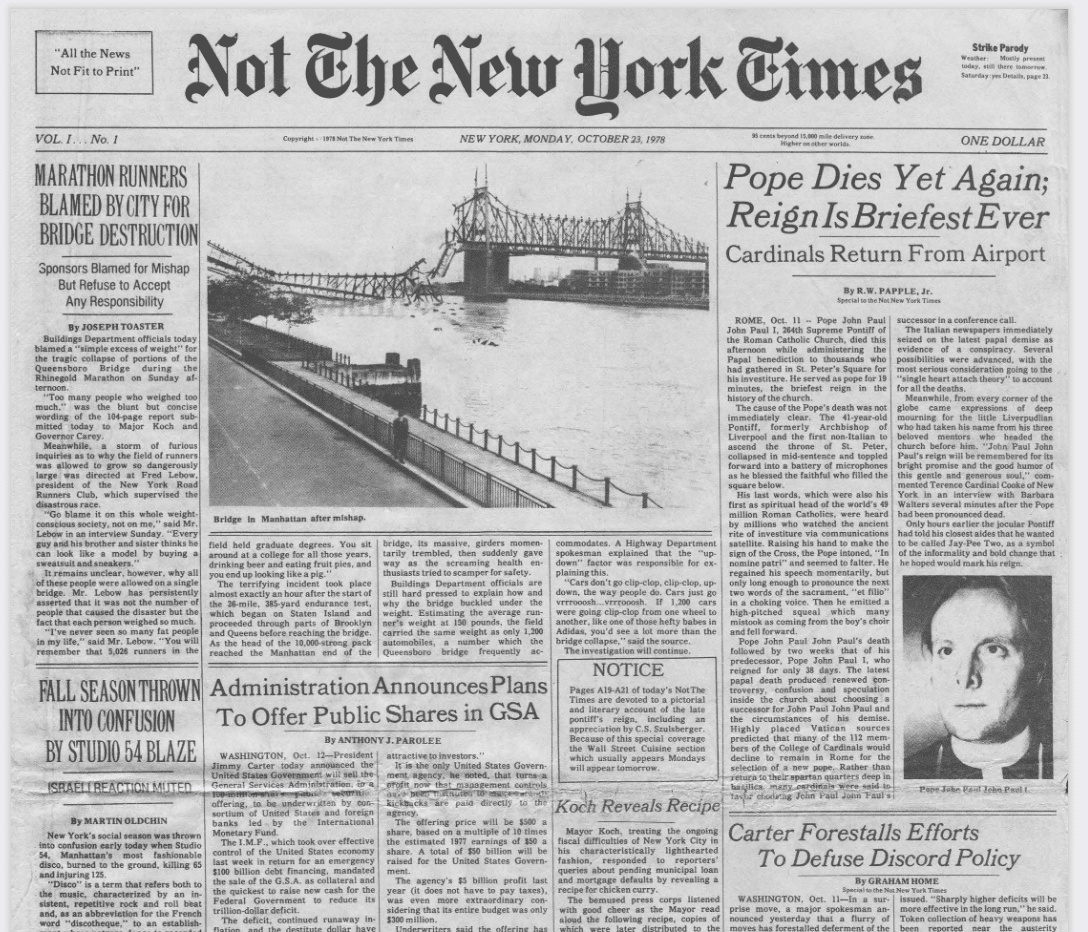 Before “The Onion”, funny stuff was printed on an ancient material called “paper”…

I confirmed my idea using Book Bolt’s research tools. Parody journals already exist, but there is not a lot of competition and, frankly, most of them, well, suck.

Again, go back and look at Not the New York Times. It sold like crazy for 2 reasons:

That’s how a good parody works.

Armed with both the data and my own gut instinct, I set off to create L/NC books that are more than just covers; they are entertaining unto themselves. I know humor sells, I know parodies have never not been hot, and I know that there are millions of people who share my sophomoric sense of humor. 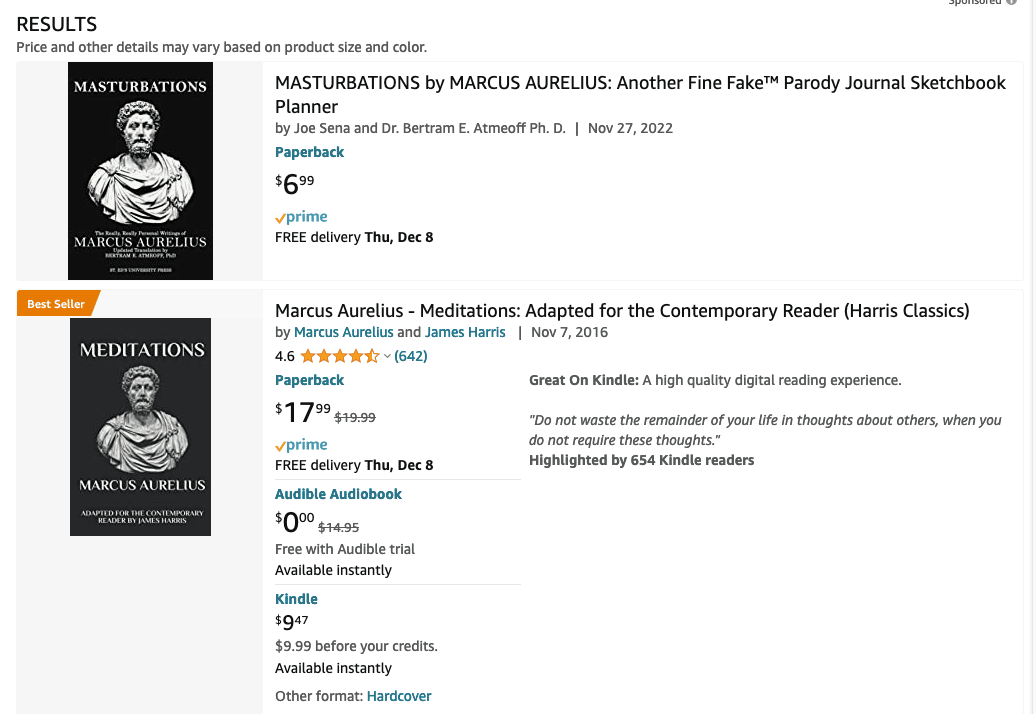 Man, I don’t think I could buy better placement. Still have no idea how this happened.

That said, no matter how brilliant my idea is, I also have enough experience to know that my Illuminati Handbook or my Get Rich By Selling Self Help Books To Suckers L/NC books are not going to sell like Not The New York Times.

However, I do know that in time, as the herd is culled and my Book Bolt-fueled SEO kung-fu goes to work on the algorithms, they will sell. They will sell slowly, and over time, consistently. I will not, however, as one of my aforementioned creations says, “get rich” on one book. Each book will bring modest, regular, passive returns.

So, the best way to ensure solid returns, the likes of which build into a dependable source of passive income? Create lots of them, which I am in the process of doing. What’s important to know is that I am investing a lot of time researching what typical covers look like, painstakingly designing for the “double take” effect, and making damn sure that even the back cover is funny.

Will it work? All signs point to yes. However, this is still a work in progress, and the intention is to put up at least 2 a month through 2023. I have about 50 concepts in list and notes form, and it takes a chunk of a day to do each one to the standard that I’ve set. I do not expect this enterprise to produce the kind of money promised by the gurus (because it is possible, just not nearly as fast as they say – perhaps I should start doing parody YouTube videos…) until well into the New Year.

Of all the advice I’ve given in this piece, I say this with no humor or irony: the preceding paragraph is the most important. This is a long game, whether your work is as good as I hope mine is or if it’s another Namaste Yoga Journal for the Pumpkin Spiced Latte Drinker. However, your chances are definitely better if you take time on each one and work hard to make it exactly the way you think your target buyer would appreciate.

To be continued (seriously)…